How can organic firms take better consideration of biodiversity?

2021 is the year of biodiversity, as illustrated by the organisation of the One Planet Summit. And yet it is still difficult for firms to build biodiversity into their sustainability practices. SYNABIO, through a working group made up of ten companies, offers 18 indicators for progress on this crucial subject.

SYNABIO, the French national association of organic food processing companies, has published 18 progress indicators to improve the practices of the sector’s companies in the area of biodiversity, going beyond European organic regulatory standards.

The issue came to light following a simple observation: biodiversity is a topic which is difficult to address with conventional indicators such as LCA. Companies drastically lacked indicators and information to take it into account in their risk analysis. It is this shortfall that this work seeks to compensate.

Following this observation, this collaborative work was undertaken by a working group internal to SYNABIO, made up of around 10 organic companies with a strong interest in the issue (Biolait, Biocoop, Bodin, Coteaux Nantais, Léa Nature, Les près rient bio, Nutrition et Santé et Triballat Noyal). Furthermore, this work also called on the expertise of the consultancy SOLAGRO and consultations of around 20 other partners.

For SYNABIO, it is important to recall that organic market players have always incorporated respect for the living world at the heart of their values, and encourage a systemic approach to biodiversity. By prohibiting pesticides and synthetic fertilisers, organic farming brings about a profound modification of agro-biological practices and generates direct benefits on abundance (number of individuals) and diversity (number of species). It is estimated that fields farmed organically accommodate approximately 30% more species and 50% more individuals.

But in response to the brutal collapse of biodiversity and the constant development of industrial farming, SYNABIO considers that it is time for the organic sector to get a step ahead by improving its practices over and beyond the requirements of European organic regulations.

In all, 18 indicators were defined, 10 of them aimed at producers and 8 at processors and retailers, which represent the vast majority of SYNABIO members. For each indicator, long-term and medium-term (2023 and 2030 respectively) were defined.

The main impact of an organic food product in terms of biodiversity can be found at the farm production stage. As the order principles, the role of processors consists of encouraging and supporting its supply channels in giving better consideration to biodiversity.

These are the 10 progress indicators encouraged for immediate deployment by SYNABIO among organic producers.

The role of organic product processors and distributors is particularly important to support and highlight the efforts of producers in the field of biodiversity, but also to lead by example.

These are the 8 progress indicators recommended by SYNABIO for immediate deployment among organic companies:

SYNABIO will shortly publish an educational guide entitled “Organic companies and biodiversity” to help companies better understand biodiversity preservation and restoration issues specific to the organic sector, and to support them in achieving progress in their practices. This guide will be supported by a training course aimed at channel managers starting in October 2021, for SYNABIO member companies. 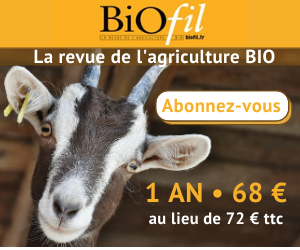